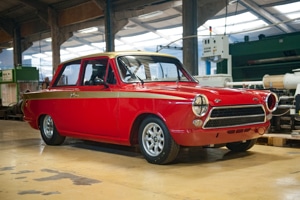 EB Motorsport is best known for Porsche, but we are no strangers to other marques as shown by last month’s appearance of an original AC Cobra in our workshops. The big-block Ford engine was a famous part of the Cobra’s racing success and another famous racing Ford recently spent time at EB, having some restoration carried out on the bodywork.

This Lotus Cortina was built by the legendary Alan Mann Racing operation in Byfleet, Surrey. Alan Mann started on the tools and eventually managed a Ford garage on the south coast. There, he started a race team (Andrews Racing) and prepared production Fords for the track.

Success on track led to an invitation by Ford US for the firm’s Lotus Cortinas to complete in the Marlboro 12 Hour race of 1963. The Cortinas came first and second, beating the home team and prompting Ford to put its European racing programme in Alan Mann’s hands the following year.

The classic Ford racing portfolio prepared by Alan Mann Racing was huge, including the Monte Carlo-winning Ford Falcons, the Mustangs that won at Tour de France and the iconic Ford Shelby Cobras which delivered the first-ever World Sportscar Championship title for an American manufacturer.

It is always a privilege to work on genuine historic racing cars from period, as there is a lot to learn about how they did things back in the day. This famous Lotus Cortina was an interesting project: we look forward to seeing it back on track!