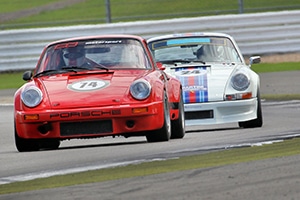 EB Motorsport enjoyed a successful weekend’s racing at the recent Silverstone Classic. Despite some very wet weather at the UK’s largest historic motorsport meeting (love the English summer), we came away with class wins in the races for both of our Porsche 911s: 1965 2-litre and 1974 3.0 RS.

“Conditions were tricky in both races,” notes Mark, “but particularly in Masters Historic Sports Cars due to the various incidents and oil all over the racing line. At the start, we fought hard and made up a decent lead over the entire field, even after I and five other cars spun through turn one on Lola T70 oil!

“After the pit stop, the Head RSR was closing at around 1 second per lap, but we had enough margin to take it to the end. However, James had a spin, which allowed our rival to close the gap and squeeze past.

“Two laps later, the Pantera had a spin and broke an upright. This brought the safety car out and we raced behind the safety car until the very last lap.

“When the safety car pulled off, there were only three corners to go. As we came through the last corner alongside the other RSR, both cars pretty sideways, Head’s car went wide and off the circuit and James took the chequered.”

“In a tense Porsche 911 RS battle, Mark & James Bates fought hard with Aaron and Dale Head for the Pescarolo class win. The Bates brothers led almost from start to finish, only headed by the Pochciol/Hanson De Tomaso in the opening laps, but the Heads were never far behind.”

“The Gentleman Drivers race for the 1965 911 was excellent,” said Mark. “We had a decent qualifying, despite this being our first time at Silverstone with the SWB 911: two seconds behind the leading TVR, same gap in front of another TVR and well up on the Historika 911s.

“We built a great lead to the other 911s early on in the race and moved up almost thirty cars in the first half. The only car to pass us was David Hart’s Cobra, one lap before the driver change. Once he was past, he couldn’t get away from me. Delighted to win with the early car and looking forward to the next race at Nurburgring Oldtimer GP.”