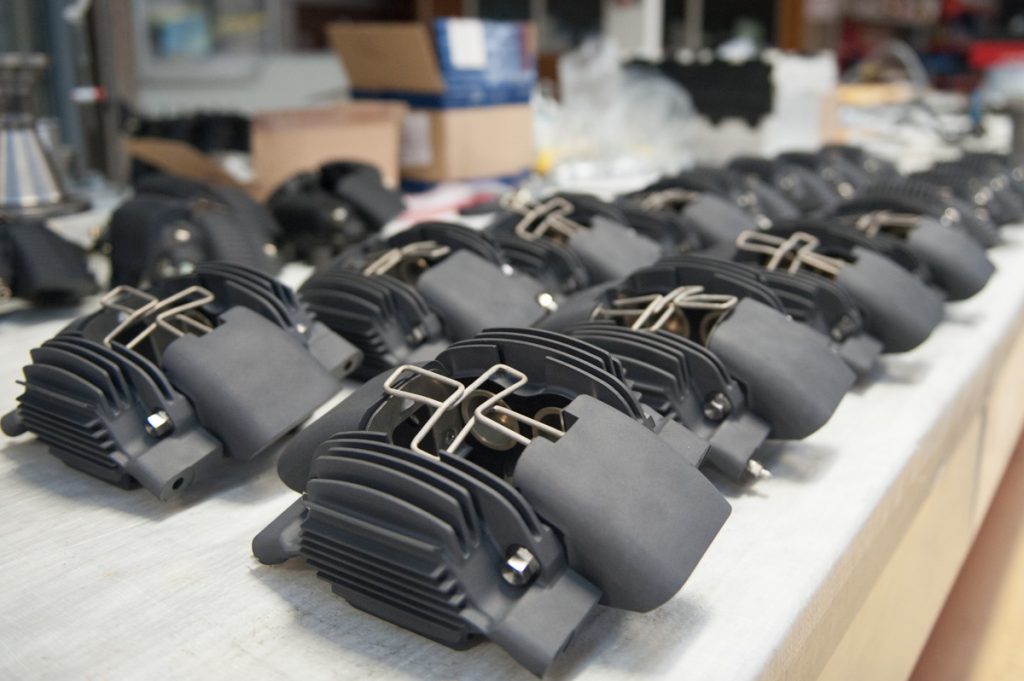 Classic Porsche race cars are famous for their brakes. Perhaps the most famous Porsche racing brakes are those fitted to the later 917s, which were modified versions of the original 917 calipers, shaped to hold a deeper pad with more friction material for long distance racing and with coolings fins oriented transversely rather than vertically, as on the earlier brakes. These are the so-called ’Endurance’ brake calipers.

While the 2.8 RSR and the 1974 3.0 RS used the slightly smaller early 917 calipers, the 3.0 RSR and later RSR Turbo used the Endurance brakes. EB Motorsport is all about authenticity, so when we decided to build our own 1974 RSR and RSR Turbo, Endurance calipers went into development.

“Just like our original RSR brake calipers, the new EB Endurance calipers are virtually indistinguishable from the originals,” says Mark. “We already use casting in much of our production – 908 throttle pedals and all of our throttle bodies – but for these new brake calipers, we decided to use a more consistent manufacturing process.

“Casting can be unreliable and produces a lot of wastage. Computer-controlled machining overseen by a skilled operator avoids these downsides. We use state-of-the-art software through the scanning, digitisation and design processes to control our machines and deliver the best results.

“The calipers are machined from a solid billet of aluminium to eliminate the risk of faulty or porous castings. Billet is a stronger material and the five-axis CNC machine can replicate the original shapes. To compliment the calipers, we machine the pistons from aluminium and everything else that is fitted to the calipers is machined from solid titanium.

“When we say we make everything, we mean everything. We make the calipers, we make the pistons, we make the crossover pipes and we make the bleed nipples. We even make the aluminium handbrake mechanisms and the brake pads that go with them. Manufacturing everything from start to finish and overseeing final product testing means that everything is completely under our control. Everything on these brakes is made under our own roof.

“Using our 3- and 5-axis CNC machines, which were recently upgraded with new control software costing £30,000 to bring our final finish to the ultimate level of detail, we were able to bring the project to recreate the Endurance racing calipers, including the handbrake mechanism, from concept to completion in under six months. We’ve since sold several sets of these calipers and following a long weekend of racing at Brands Hatch using these calipers with homologation-correct steel fixings, we can testify to their effectiveness!”