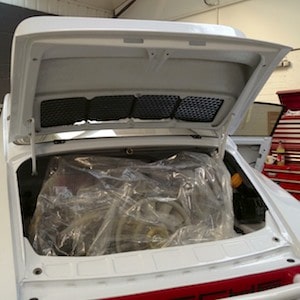 Our friends at Francis Tuthill Porsche in Oxfordshire are big fans of our products. Here’s one of our Porsche 911 ducktails attached to a brand new Safari rally car being built for Sweden’s Team Tido and the Race4Health attack on the 2013 East African Safari Rally.

Race4Health was officially launched at a fundraising dinner in Stockholm on November 21st, one year before the start of the rally. The dinner was organised by David von Schinkel, Team Tido principal and man behind this challenge to raise funds for African charities. Titan Television will follow the preparations before the rally, and in Africa during the competition.

“This is an excellent presentation and “shakedown” for our new cars for the East African Safari Rally,” says David. “It’s incredibly fun that Rally Sweden has included historic cars at this year’s competition. It is our belief that both classes can complement each other well. At the same time we will introduce our Race4Health project.”

Anything that with exciting Porsche racing has got our support, especially if the cars use EB products. Well done to Team Tido and to Tuthills: more news as we get it.

See our Porsche 911 ducktails in the EB Motorsport online shop.