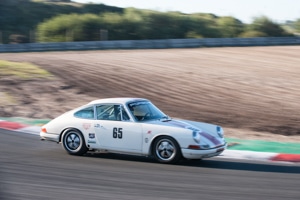 EB Motorsport’s 1965 Porsche 911 will be one of the cars lining up on the grid for the first race of Peter Auto’s brand new 2-Litre Cup series for SWB 911 racers.

As this is a Le Mans Classic year and Peter Auto runs the Classic, we may also get to bring the 65 back to La Sarthe for its second appearance as part of a 2L Cup grid. This is not confirmed as yet, but fingers crossed.

Our friends at Maxted Page have been instrumental in the creation of the series, assisted by a team including two more friends and clients: Historika and Tuthill Porsche. Grids of up to forty cars are expected to attend each round, so we’re really looking forward to pitching our best efforts against some of Europe’s finest racing 911s.

Our previous battles with the cream of European SWB cars have not gone badly – we were first 911 home in the Spa 6 Hours, for example – and the Ivory 65 has been fully overhauled here at EB Motorsport through the winter, so it is ready to put up a good showing. As the saying goes: when the flag drops, the chat stops – bring on the race season!