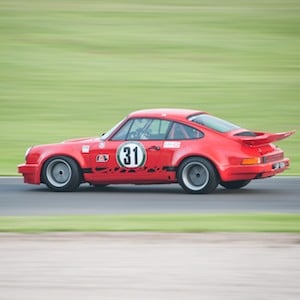 We enjoyed a good weekend at the Donington FIA Masters Festival, where we ran our 911 RSR, 74 3.0 RS and also debuted our 911 SWB 2-litre racer.

The World Sportscar Masters race was interesting, as Mark was in the pits twice thanks a mix up with pit timings and worries over penalties. James in the 3.0 RS had no such issues and was ahead of Mark for a couple of laps.

“James has got quicker this year – two seconds a lap quicker around Donington – as familiarity increases with the car, so it’s more difficult to get past. We had a good fight but ultimately cost each other time,” said Mark.

“I could have done without the second stop, but we weren’t sure how tight the first was to the window for mandatory pit stops. It was better to take another one, just to be sure. That lost me about 40 seconds, so thankfully the Corvette I was racing retired before being classified. Bit of a crazy race but we’ll take the win any way it comes.”

“I’m pleased with how my race went,” said James. “The car is great to drive and my pace steps up every time we compete. It was good to tussle with Mark in the middle. Brotherly love stays in the pits during racing, but we trust each other not to damage the cars. A bit more of that this year would be good.”

Monday evening saw the race debut of the 1965 911, and what a race it was. Huge oversteer around most of the lap was not the quickest way around, but Mark had a good little battle with an Elan towards the end and reliability was the focus to start with. We’ll work on the setup and see how it goes at Brands on May 24/25!