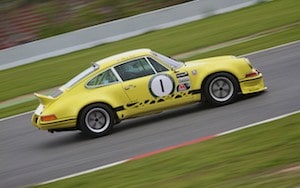 The EB Motorsport Porsche 911 RSR returns to Spa this weekend, to defend both its 2012 World Sportscar Masters title, and outright victory in the separate Top Hat Masters race at the epic Belgian track last year.

First qualifying today was for Top Hat Masters: a production car series that permits a wide range of cars to be entered. Mark brought the Porsche home fourth on the grid: a result he is rightly pleased with.

“There’s a huge Top Hat grid here at Spa,” said Mark. “Must be 60 or 70 cars: everything from pre-66 Minis to a 1970s NASCAR. I led the oval racer up the Kemmel Straight in practice and, even at 145 mph, the force of air coming off the NASCAR was enough to push the 911 around.

“Fourth on the grid is fine. Last year we had pole with a 2:49, which some said couldn’t be done. Pole this year went to an Escort at 2:44, but that car is quite radical: rose-jointed suspension with solid bushes, 6-pot brakes: even the rain gutters either side of the windscreen are filled. Other cars up front are quick enough in qualifying, but can they keep that pace up for a 61-minute race?

“Fuelling at Spa is a headache, so I like to come here with fresh rubber and a full tank of fuel, go out and take it steady. That way, we gain speed through the whole weekend as the fuel burns off. I don’t know how others will play it: we’ll see how it all works out.”