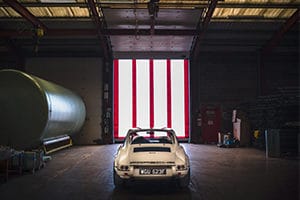 The latest issue of Panorama magazine – the magazine of the Porsche Club of America – carries a twelve-page feature on the EB Motorsport 911R Celebration. We were also delighted to be featured on the cover.

Written by American journalist and classic Porsche enthusiast, Robert Plotkin, the feature covers the build of our super-lightweight short wheelbase 911, built as a homage to Porsche’s record-breaking 2-litre run at Monza in 1967. Robert is effusive in his praise for the project.

“The EB 911R sat in the middle of the room. So ethereal was its beauty that it seemed to float an inch above the floor, on a thin slip of mist, its contact patches uncompressed and pointy. The overall effect was that of a sinewy athlete, one whose body was formed by trail running and swimming, not steroidal grunting.

“The EB 911R is not an exact replica; and that’s what (Mark) Bates wanted. “We have restored a real 911R and have a library of material on the cars. But we wanted this car to be a showcase for everything EB makes: from the composite body panels, Lexan windows and headlight covers, engine tinware, hinges, and reproduction Fuchs. It also shows the services we can perform: the restoration, mechanical, and paint booth we have on site.”

At the end of the feature, Robert decides that the strict adherence to performance over comfort required to get this car’s weight down to less than 800 kilograms is not something he could live with every day. “In effect, the 911R was so extreme in its quest for lightness that it’s given me the freedom of moderation. So sometimes I’m a lightweighter and sometimes I’m a heavyweighter.”

Therein lies the real beauty of our 911R: it is a zero compromise project, built to showcase our in-house manufacturing capabilities, but also to honour the first purpose of Porsche. The original sports cars made the Porsche ethos clear: when it comes to performance, there can be no compromise. Go light or go home.

Many thanks to Robert for a really great feature! We look forward to welcoming Panorama back to Barnsley when our next no-compromise Porsche build – the SC GT – is ready to drive. That is already a very exciting project!