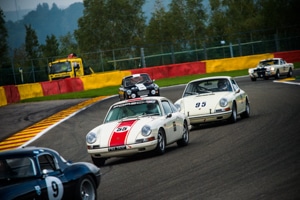 Yorkshire’s EB Motorsport rounded off a highly successful 2015 historic racing season as first 911 across the line and the first ever 2-litre 911 GTS class winner in the Spa 6 Hours endurance race.

Racing against the cream of European historic GT cars including Ford GT40s, Lightweight Jaguar E-Types and Shelby Cobras with more than twice the horsepower of EB’s Porsche 911, drivers Mark Bates and Sean McInerney took a wet Spa Francorchamps by storm, coming home twelfth overall and the only Porsche 911 in the final top twenty, despite racing in a class where a third of the 34 entrants were Porsche 911s.

“We finished as second 911 here last year, so our goal was to go one better,” said Mark Bates. “Beating the established pace-setters (lightweight Marcos, TR4s and MGs) was tricky, as our fuel consumption requires an additional pit stop costing almost two laps, but our race pace proved just enough to keep them behind. Credit must go to my excellent team mate, Sean McInerney, who has logged hundreds of race hours at Spa and was also driving a TVR in this race! Sean shared all of his experience so we could achieve this great team result.

“Sean and I were closely matched in dry laptimes around Spa, but once the rain falls, it’s all about knowing where the grip is. Data showed how much more speed Sean was carrying in the wet – almost four seconds faster along the Kemmel Straight – so I followed his wet lines and that really helped.”

Already the world’s longest historic endurance event by racing hours, the 2015 Spa 6 Hours clocked up its longest-ever overall distance, with almost 750 kilometres logged by the winner. EB’s long race included fearless overtakes through a wet Eau Rouge, the 911 finishing just 2.7 seconds ahead of its closest competitor after six hours of racing.

“Our development of this car has not stopped all year,” Mark stresses. “The greatest improvements in laptimes have come from our work on suspension and exhaust to FIA Appendix K regulations, but we must also thank Tuthill Porsche for starting us off with a powerful, reliable 911 and our friends at Millers Oils for continuing to support our racing with their exceptional products.”

Spa marks the end of EB’s 2015 race season, which featured memorable races in the Goodwood Aldington Trophy, Donington 1000 kms and Nürburgring Oldtimer GP. Recently returned from the Rennsport Reunion at Laguna Seca Raceway in California, EB Motorsport has not yet announced its 2016 programme, but the excitement is sure to continue.