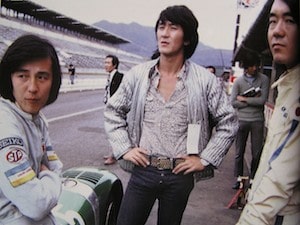 Tetsu recently built a historic racing 911 using a wide range of EB Motorsport panels and racing parts. The finished car won the championship at the first attempt. The quality and durability of our parts convinced Tetsu (sitting on the left in this epic period pic) to help EB connect with Japanese and Far Eastern 911 enthusiasts, and offer exceptional period Porsche parts for a reasonable price.

“To have such a respected Porsche personality and racer in cars like the 906, 908 and 935 representing EB Motorsport on the other side of the world is a huge honour,” says our Mark, reigning FIA Masters Historic Champion. “We’re delighted to do business in Asia through Tetsu and Team Ikuzawa – long may the partnership thrive!”

Born in August, 1942, Tetsu Ikuzawa began his racing career on motorbikes. In 1963, he started racing in a Prince Skyline Sport (the Prince Motor Company was later bought by Nissan).

Debuting on four wheels in the Japan Grand Prix, he raced Skylines in Japan for three years before coming to Europe to measure his talent. He won the 1967 British Formula 3 series – the first Japanese driver to achieve such a feat – also winning the under 1,000cc class at the 1967 Nürburgring 500-kilometre race.

Back in Japan, Tetsu raced a Porsche 906 in the 1967 Japan Grand Prix. Victory in that event led to a works drive in the Porsche 908 at Watkins Glen.

Formula 1 was always a goal. Tetsu’s “Team Nippon” F2 team should have been a route to F1, but a slow car in the GRD 272 didn’t help. F1 never happened, but Tetsu went on to race at Le Mans for Sigma, and later for Kremer Porsche. Tetsu subsequently ran a Japanese F2 team, fostered the first Japanese F1 driver Satoru Nakajima and was director of the Nissan Europe Racing Team.

Now in his seventies, Tetsu did his first classic racing last year, using a 911 in the Sideways Trophy championship, and beat younger drivers in lighter cars to the flag. He is a true Porsche legend!