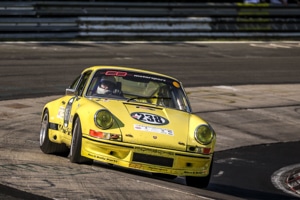 EB Motorsport’s Porsche 911 RSR took a memorable victory at the Nürburgring last weekend, finishing one lap ahead of its closest competitor in the punishing four-hour Nürburgring Trophy race at the 43rd Oldtimer Grand Prix weekend.

As ambient temperatures hit forty degrees Celsius, the relentless summer sun caused many retirements in the famous historic endurance race, as cars and drivers broke down in the heat. Our drivers – Mark Bates and Sean McInerney – demonstrated supreme stamina and the legendary pace of their Porsche 911 RSR by reaching the chequered flag first, ahead of Nürburgring veterans, Porsche legend Olaf Manthey and former Porsche Supercup champion and Audi works driver, Frank Stippler.

“It’s incredible to win in our second attempt at the Nürburgring Trophy,” said Mark. “Last year we raced in torrential rain, this year the Tarmac was practically melting. This was easily our toughest race ever, so to finish on top of the podium alongside two proper Nürburgring experts and German Porsche heroes – Olaf Manthey and Frank Stippler – is a dream come true.

“Two weeks ago, the car was wiped out by a competitor on lap one of the Masters Historic Sportscar race at the Silverstone Classic. It took a lot of hard work back at our Barnsley headquarters to get the car repaired and ready for Germany, so this win is a great reward for our efforts. The organisers said it might even be the first-ever Nürburgring Trophy win by a non-German team: if that’s true, it’s a bonus!

“A big thanks to Sean, the perfect team mate, our sponsors, Millers Oils, and to Ben Rodziewicz from Rennspeed in Nottingham, who was here as a spectator but helped out in the garage all weekend. Next stop is the Historic Grand Prix weekend at Zandvoort later this month: another classic circuit where we always go well.”