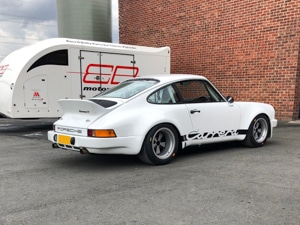 This Porsche 911 3.0 RS in classic Grand Prix White was a recent visitor to the EB workshops. Brought in by a new owner, the car was on larger modern wheels and had been fitted with a custom exhaust that left much to be desired.

The customer arrived at EB looking for a set of our Fuchs-style RSR wheels and a 2.8 RSR rear bumper fit in the EB bodyshop. Trying our bumper on the car, we advised that the exhaust was hampering the bumper fit so it just did not look right. We then agreed a plan of modifications with the owner.

The first job was to remake the exhaust to be more in tune with the original 1974 3.0 RS style. Our fabricators did this with new stainless tailpipes, spaced further apart for the period look. We also repaired a bit of corrosion in the rear panel and did some work on the rear wiring.

With the exhaust side sorted, we mocked up a custom rear bumper with vents to the underside. The bumper was moulded specifically for this car and we also painted a substitute rear reflector panel in body colour to tie the rear end together.

The 3.0 engine was fitted with carbs and they were not running correctly, so the carbs were overhauled with a full strip and rebuild, re-jet and float heights reset. We then gave the engine a service including fitting new plug leads. The work transformed the throttle response and gave the car a much-needed boost.

The final touches included stripping out a poorly-modified short shift kit and replacing it with one of our shifters. We fitted the RSR wheels on Pirelli Corsa Classic rubber and set the car up with a low but road-friendly geometry. This cool 911 now looks amazing and the customer was delighted with the finished product. We wish him many happy miles with the transformed RS-style hot rod.