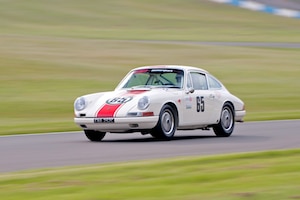 We’ve lined up a full race diary for our trio of Porsche racers this year. After a number of competitive outings during 2014 for EB’s 1965 Porsche 911, the Light Ivory 2-litre car will lead the team’s charge in 2015.

A top twenty finish and second early 911 home in last year’s 6 Hours of Spa led to the quest for more power. Tuthill Porsche has since rebuilt the 1965 car’s 2-litre engine under the watchful eye of FIA technical delegates.

EB has also been developing a new FIA-compliant exhaust system, aimed at becoming the class benchmark. Dyno tests have shown improved power and torque: a silenced version is expected to be fitted to the car in time for the season-opening Goodwood Members’ Meeting on Sunday March 22.

From Goodwood, we head to Donington Historic Festival in May, racing its 3.0 RS and RSR 911s as well as the 1965 car. Masters rounds at Monza, Nürburgring Oldtimer, and Zandvoort Historic will preface a return to Spa for the 6 Hours weekend. Enquiries are pending regarding an entry in the support races at the Le Mans 24 Hour.