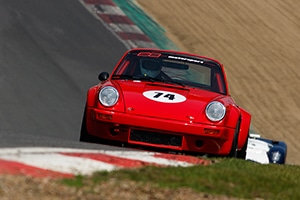 “We’re still waiting for the FIA Historic Technical Passport to arrive for this new RSR, so we in the invitational class,” said James. “Ours was the only 911 on track, meaning there was no one to beat. We approached the weekend as more of a test session and experimented with setup changes on every session. The fastest time in qualifying was just two-tenths outside the magic 1:40, so there’s a sub-1:40 lap time in this chassis for sure.

“With much wider track and lower weight thanks to our new bodywork, optimised and re-engineered chassis parts and our latest 911 RSR ’Endurance’ brake calipers giving stunning braking performance, the new car is terrific to drive. We’re really looking forward to trying it at some of our favourite circuits later this year.”

EB’s 2-litre 911 was also in action at Brands Hatch, racing in the Stena Line Gentlemen Drivers. Mark and set the fastest SWB 911 times of the weekend, qualifying on a 1:52.946 and setting a fastest race lap within four one-hundredths of a second of that benchmark, but the car was forced to retire when the splines were stripped from one of the rear hubs.

“The 2-litre is being raced hard again this year,” said Mark. “It’s already been out at Goodwood in MM76 where it came home as first 911, it took another podium at Spa in the inaugural 2.0L Cup race and now we’ve pushed it to the max at Brands. It is probably the most raced 2-litre FIA car in Europe and we’re learning more about it all the time.”

EB Motorsport has plenty more racing ahead this year. The 2-litre is back out in June for the 2.0L Cup race at Dijon Grand Prix de l’Age d’Or, followed by Silverstone Classic and on to the Nürburgring Oldtimer GP and Zandvoort Masters weekend. September has the Spa 6 Hours and accompanying Masters Historic meets before the season ends with Masters in Dijon from October 12-14.