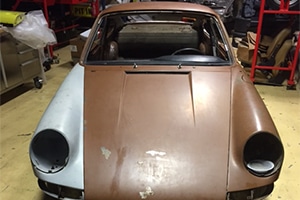 This sweet little 911 T has just joined the EB Motorsport Porsche project collection. Doesn’t look like much in the photos, but it’s a good solid car with all those hard-to-find trim bits in place.

Obviously it’s a left-hand drive US example. We found it for sale in Portand, Oregon and shipped it back to the UK. Our early RS and RSR builds were both right-hand drive but the left-hand drive 911 SWB car has been no problem in racing.

One nice point is that it’s a 1972 911, so has the side-mounted oil filter flap behind the passenger door and the forward-mounted oil tank behind it. This feature has become a desirable ’geek point’ over the years and we’re not ashamed to let our inner Porsche anorak have its way now and then.

This short-lived production change was made for the benefit of weight distribution in racing, but did not last long, as new owners started filling their oil tanks up with gasoline. The side oil tank means this 911T would make a very nice ST replica, but there are no set plans for the 1972 911 just at the moment: we have enough to do with building our 911R replica and the 911 RSR Turbo build has taken on a life of its own. Combine that with running a busy engineering company and racing every second weekend and the projects will just have to wait!