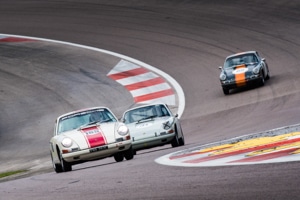 In the 2.0L Cup, our 1965 911 set a time of 1:42.4 and will also start second on the grid. The fastest 2-litre of Historika’s Andrew Smith and Olly Bryant was 1.1 seconds ahead of the rest of the field, with second to sixth positions split by the same 1.1 seconds. Twenty-six cars have entered the race and it should be an exciting battle.