We’ve been keeping tabs on Tim Walker’s rebuild of a crashed Porsche 959 replica. Originally a 1971 911E, the 911 has now been reborn as a beautiful SWB Porsche 911R replica, using the full range of EB Motorsport lightweight 911R panels bought from our US distributor, Rothsport Racing.

The story of Tim and his 911R build is a good one. “I acquired the car in January 2016, when it was advertised on Auto Trader as a 1984 911 (959) in Idaho. Turns out the car was a 1971 911E. Auto Trader does not allow sellers to list cars older than 1984, so that is why the year was posted incorrectly. After a couple of phone calls, I made the deal and arranged shipping to my home in North Carolina.

“I used the car for two weeks after it arrived. It was horrible to drive: the car would oversteer worse than anything I’ve ever driven. The 959 body kit was really heavy, especially in the rear. While I was considering my next steps with the project, a friend of mine asked if I would take him and his 8 year-old daughter to a father/daughter dance in the car. I was happy to help.

On the evening of the dance, I took the car to get it detailed and fill up with gas. Coming back from the gas station, I was cut off and hit a car that had turned in front of me. That was the end of showing up for the dance in the little red car.

“To make a long story short, I decided to restore the car back to its narrow body days. Little did I know the horrors that were beneath the 959 body kit. At some point, the car had been wrapped around a pole and the shell was in the shape of a banana. The torsion tube was cracked, the passenger’s inner rocker was bent, floors were rust free but had suffered years of neglect. 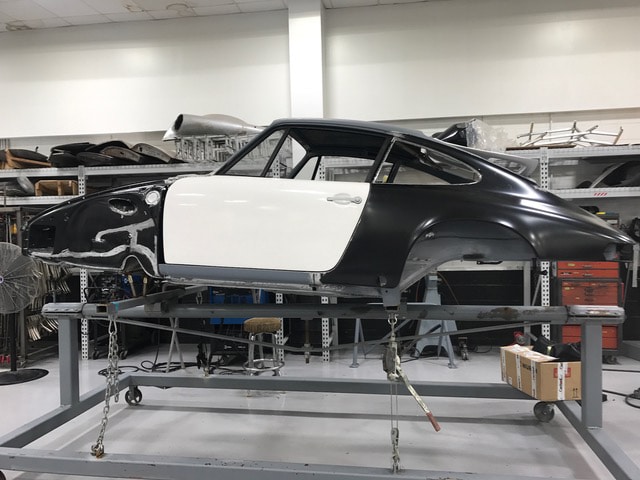 “The whole front end of the car was so poorly repaired that I ended up replacing both inner front fenders. As I’d decided to do a 911R copy, I cut the passenger rear quarter panel up to house the proper sheet metal to hold an oil console from a 1972. This way I could use a 1972 oil tank in the quarter panel: I just had to cut the hole and extend the filler on the oil tank.

All the undercoating was scraped off with a wire brush. Despite the chequered history, the car is 100% rust free, so I went with EB Motorsport panels to retain that authentic look, including the hood, bumpers, front fenders, doors and rear deck lid.

All the work was done either by myself or the guys at Carolina Coach Crafters in Mooresville NC. There’s no shortage of car lovers here as every street corner either races NASCAR, SCCA or IMSA. The original colour was Albert Blue, but I wasn’t sure about that on a 911R. In the end, I went with Continental Orange as the shop had a Porsche 356 in for some repairs which had been painted with that as an option from new.

The car has the original transmission, but the engine was from a 1975 911 Carrera. It has Weber carbs and the engine is twin plugged. All of the suspension, brakes and steering was fully refurbished and I refitted all of it myself in my workshop at home.

“As with all 911Rs, the cabin is purist. I sourced some restored original hardback Recaro sports seats, a simple roll hoop and lightweight carpets. I’m into the last ten per cent of the rebuild now and taking my time to get it finished right by staying focused on attention to detail. I’m very pleased with the project so far.”

We think it looks superb: so nice to see an R build completed in a vibrant colour. Using a damaged early car to build a SWB 911 with 2.7-litre power sounds like a perfect recipe and saving the 1971 911 and getting it back on the road deserves a round of applause. Well done Tim!