This is EB Motorsport’s interpretation of the Porsche 911 2.8 RSR chin spoiler / lower front spoiler, often referred to as the chin spoiler.

This was an enhancement the factory-made partway through the 1973 race season. This short spoiler tucked under the front bumper of the Porsche 1973 2.8 RSR and was at the dawn of Porsche’s experiments with 911 aerodynamics. The early development versions were made in aluminium, later spoilers were manufactured using composite. These can be seen at Le Mans with the factory teams and such as the Gelo entries, driven by the likes of Jurgen Barth and at Daytona on the winning Brumos entry, driven by Hurley Haywood.

Our version incorporates a small splitter for enhanced aero. Having run with and without the splitter, there is a marginal difference between the two in our experience.

This spoiler has been tooled to be a near-perfect fit with our 2.8 RSR front bumper. We’ve spent hours getting this part right, which you can see from the fit on our own RSR race car. For those looking to use in historic racing, numerous cars including our own 2.8 RSR have FIA HTP. 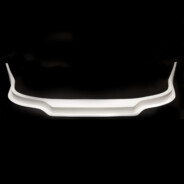